The construction of the Kamuda Seed SS is going to cost the district and government billion shillings 2,950,302,304, a construct which was awarded to Kakise Holdings Ltd.

According to the district Engineer Simon Okello says the project construction works is going to last for 2 years and the contractor is expected to finish work by October 2024.

During the launch the community members expressed their happiness for having been given a public school as this will now uplift the standards of education in the sub county.

They say the community school started by parents used to absorb pupils from the primary section, and helped parents who cannot afford to send their children to distant learning institutions.

Meanwhile the Soroti District Education Officers -DEO James Oede says the construction of Kamuda Seed Secondary School is part of government efforts to ensure that all sub-counties across the country have a seed school.

Oede says the funding grants are from the Ministry of education through government program of UgIFT, a program that contributes to the Government's Intergovernmental Fiscal Transfer Reform Program (IFTRP), which aims to strengthen the financing, funding and reduce the disparities in funding for service delivery across local governments.

The Chairperson Board of Governors, Daniel Eigu has challenged the Kakise holding to do diligent work, because the government has put a lot of money into constructing a Secondary school for the community.

Eigu who was a former LC-111 Chairperson Kamuda applauded the government for uplifting the standards of the Kamuda Parents SS that its name has been changed to Kamuda Seed SS, saying Kamuda being one of the oldest sub counties in Soroti district has been behind in terms of education because it had no better school.

While launching, the deputy RDC Soroti, Martin Kasonsi warned the contractor of shoddy works saying the government is investing a lot of money in this project.

Kasonsi said as the office of the president representative, he will be closely monitoring the progress of work.

“I will be monitoring how work is being done here, because this is a big amount of money injected, so no jokes with government money,” said Kasonsi.

Meanwhile, Simon Peter Edoru Ekuu , the LC-5 Chairperson Soroti challenged the schools administration to ensure the improvement of the standard of education by passing students with better grades. He said that having the structure alone does not attract students but how pass students matter for the development of this school.

The school was started by parents under the guidance of late Bishop Geresom ilukor in 1998, though that school has been under the parents but as of late in 2016/17 the government took over it.

The school is important for the community of Kamuda and the district, and Edoru asked the school management to start lobbying for the A level through the education department. 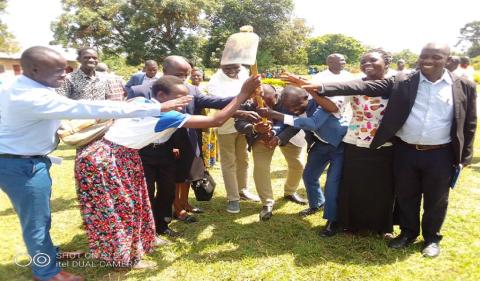